The picture shown is the Rif Mountains. The mountains make up the northern region of Morocco. The Rif Mountains were home to the Berbers who fought in the Rif War against the Spanish, who were later joined by the French

The Rif War was a war fought from 1919 to 1926 with Spanish troops against the Moroccan Rif and Jibala tribes.  Through the Treaty of Fez signed in 1912, Spain was given control of two cities in the northern Rif Mountains, Ceuta and Melilla.  Both of these mountainous zones had very little roads which made communication and developing the areas very hard for the Spanish.  Beginning in 1920, a Spanish commissioner named General Damaso Berenguer  wanted to get control over and an area in the northeast that was already settled by different Jibala tribes.  In addition, the Spanish commissioner wanted to keep Abd-el-Krim and the rest of the Rif tribes under control, which Berenguer instructed Manuel Fernandez Silvestre to do.  By the end, Berenguer's goal was to bring together both zones, with the JIbala and Rif tribes, together. Even with the actions taken to prevent Abd-el-Krim, the Spanish were not able to stop the tribes or to unite them under Spanish control.  Spanish troops were defeated by Abd-el-Krim's forces.  After that, battles continued on and off between both sides.  When the Spanish lost, they were major losses.  Spain lost partially because of ineffective leadership and not enough weaponry.  One battle, that was a big loss by Spain, was the Battle of Annual on July 22, 1921.  At Annual, Abd-el-Krim's troops were able to destroy the 20,000 in Spain's army.  During the Rif War, Spain was brought all the way back to Melilla.
Near the end of the war, France was forced to get involved.  France joined the war to help Spain by 1925.  With the help of France, a combined French and Spanish army was strong enough to control the rebels.  Their plan to defeat Abd-el-Krim was to have French attack from the south and the Spanish attack from the north.  The Spanish force landed in Alhucemas which is located near Agidir.  Then, the French numbered 160,000 and came from the south.  Abd-el-Krim is finally defeated by an army consisting of 250,000.  The 250,000 men used weaponry and technology that were more advanced and superior. allowing them to defeat the Rif and Jibal tribes.  At the end of the Rif War, Abd-el-Krim surrendered on April 27, 1926 and the protectorates were left intact (Rif War (Spanish History), Encyclopedia Britannica Online; Morocco: The Spanish Zone, Encyclopedia Britannica Online).

Republic of the Rif

Leader of the Rif: Abd-el-Krim 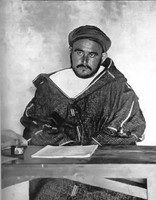 Abd-el-Krim was the leader of the Rifs who helped form the Republic of the Rif.  Also, Abd-el-Krim was the leader of the rebellions against the Spanish and French rule in the Rif Mountains.  He was born in 1882 in Ajidir, Morocco and died in 1963 at the remarkable age of 81.  Abd-el-Krim's father was in the Berber tribe called the Banū Uriaghel.  Krim was given the opportunity to get a Spanish education.  At the age of 33, he became part of the Spanish government when he ran the village, Melilla, as the chief Muslim judge.  Abd- el Krim grew to hate the Spanish policies.  He criticized the Spanish, saying they couldn't expand their land and felt sorry for the Germans during World War I.  After, World War I, Abd-el-Krim was put in prison for his suspicious and rebellious activities.  Later, he returned to his hometown. Ajdir, in the Rif Mountains and made plans to revolt.  Abd-el-Krim tried to provoke a war.  Abd-el-Krim was successful at first, able to defeat the Spanish army and to form the Republic of the Rif.  Eventually, the French got involved and a combined army was able to defeat him.  In May, 1926 Abd-el-Krim was exiled to the island, Reunion (Abd El-Krim (Berber Leader), Encyclopedia Britannica Online; Rif War (Spanish History), Encyclopedia Britannica Online; Morocco: The Spanish Zone, Encyclopedia Britannica Online).
Powered by